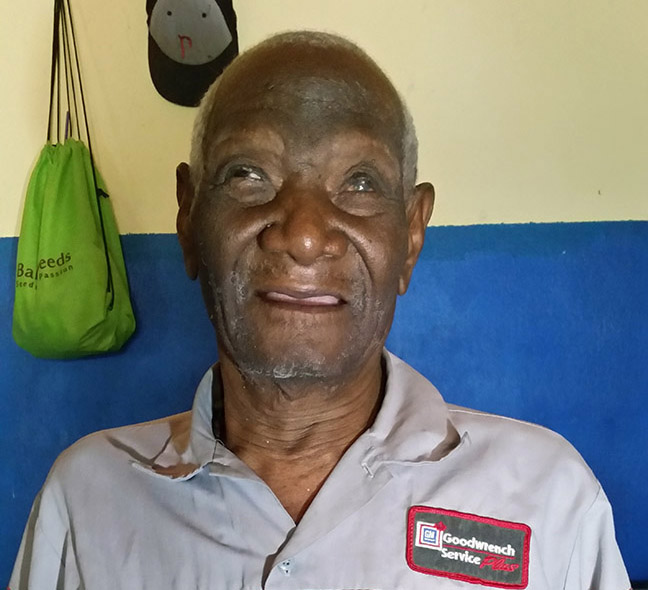 Solon is approximately 80 years old. Although he is married, he was abandoned by his wife because she could not cope with his blindness or support him. With no one to look after him and no income, he was admitted to Le Bon Samaritain residence for older persons in need.

Solon is grateful for life at the Bon Samaritain. He enjoys the companionship of the other residents, with whom he likes to laugh and tell stories. He has some family members who, although they live at a distance, visit occasionally and bring him gifts of home cooked food. Solon also enjoys playing with children, listening to the radio, and attending church.

Sponsorship for Solon will assist in the continued provision of food, clothing, and medical attention for him when necessary. Just as importantly, it will show him that someone cares.

With a population of 10.7 million, nearly 60% of Haitians live in poverty, and an additional 25% live in extreme poverty. Many Haitians live in one-room houses with outhouses and no running water, poor nutrition, and inadequate health services which places most people repeatedly at risk for major life-threatening diseases. Exacerbated by a series of natural disasters over the past two decades, including storms, flooding, landslides, drought and the catastrophic earthquake of 2010, day-to-day survival is difficult for a staggering amount of Haitians. The Elderly are among the highest at risk for disease and poverty. With an approximate 50% unemployment rate in urban areas, the Elderly are the last considered for a job, leaving far too many with no income and no pension