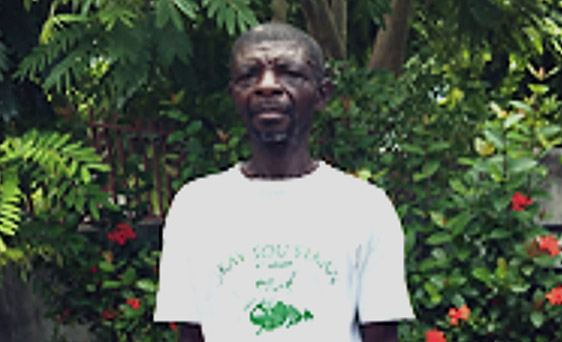 Although Sedilhomme does not know his date of birth, he believes that he is about 67 years old. He and his wife had nine children, of whom two daughters and six sons are still living. He is Catholic, speaks Creole, and is illiterate.

For many years Sedilhomme supported his family by working as a farmer. As he was tending his garden one day, he was attacked by a robber, who nearly severed his right arm. An operation successfully saved the arm but was unable to restore it to full function. Sedihomme perseveres, planting his garden in the hope of raising enough food to sustain his family. He is unable, however, to work as efficiently as previously, and he is unable to return to farming as a source of income.

A mild-mannered, respectful man, Sedilhomme also suffers from arthritis and depression. He has difficulty sleeping, which understandably has an impact on his life, as well.

HelpAge Canada has collaborated with this partner caring organization for many years, helping extremely vulnerable elderly persons who might otherwise not survive. Your valuable sponsorship will assist in the provision of food, clothing, and many other basic necessities for Sedilhomme’s care. Just as importantly, he will know that someone cares.