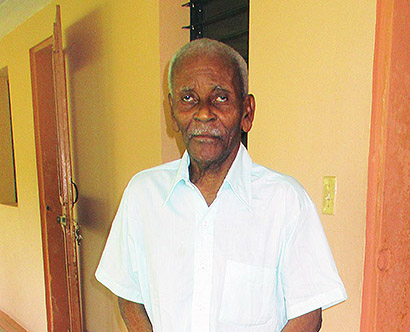 Raguil Solomon is approximately 90 years old and is widowed. He was born in Arniquet, a city in the southern department of Haiti. He is catholic and speaks creole, though he is illiterate.

Raguil worked hard as a Farm Hand all of his capable years to support his wife and 4 children. One of his sons has passed away, and his living son’s health is too poor to care for his Dad. His only daughter, also poor, is unable to care for him.

Raguil was brought to le Foyer St. Etienne in Les Cayes by well-wishers who found him destitute and extremely malnourished. Fortunately, although the beds are limited, Father Charpentier was able to take him in. He has since been nursed back to fair health, although he is blind and has high blood pressure with recent dizzy spells.

Sponsorship for Raguil will assist in the continued provision of shelter, food, clothing, and medical care at the home, which is run by charitable donations. More importantly, it will show him that someone cares about his health and dignity in this stage of his life.

With a population of 10.7 million, nearly 60% of Haitians live in poverty, and an additional 25% live in extreme poverty. Exacerbated by a series of natural disasters over the past two decades, day-to-day survival is difficult for a staggering number of Haitians.