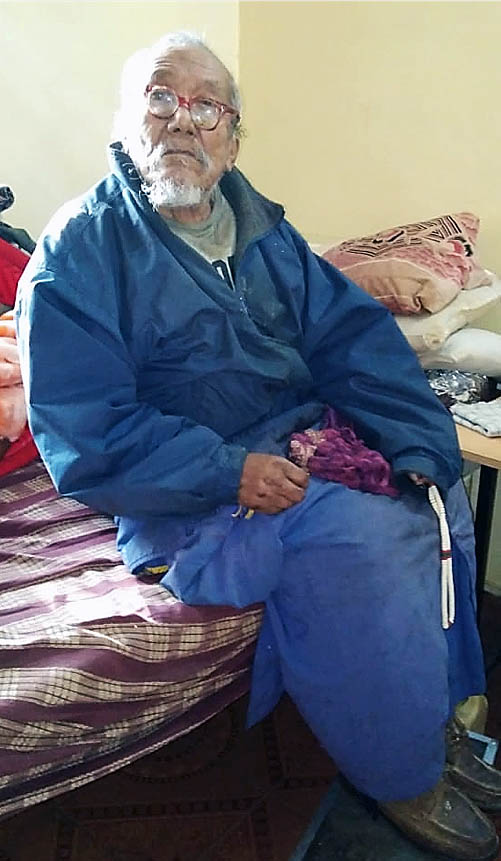 Jampa Kunga was born in Nakchnn-Khain, Tibet in 1930 and is approximately 90 years old. He has always been single and has no children or family he can rely on for support. He is Buddhist and speaks Tibetan.

In 1959, at the time of the Chinese invasion, Jampa fled Tibet and moved to northern India. He was glad to find work as a road labourer and supported himself that way until he joined the Indian army in 1963. After serving for 17 years, Jampa retired from the army and worked elsewhere as a cook. When his health began to fail, he was sent to live in a community supported by the Tibetan Homes Foundation. With no family to visit him, he thinks of the staff and nearby residents as family, and he is so thankful to be there.

Jampa is currently in rather poor health. For many years he has had issues with his knees, has found stairs to be challenging, and has been glad for the use of a cane. He also has poor vision, which is at least partially corrected with glasses.

Jampa is a kind and quiet man. He spends much of his day reading scripture and chanting mantras. He also enjoys sitting in the sun chatting with the other Grans and listening to the news on the radio. He still likes to go for short walks, although he does not do that as often as he used to because of increasing difficulties with his knees.

Sponsorship will assist in the regular provision of food, shelter, medical attention, and many basic necessities for Jampa. Just as importantly, he will know that someone cares.