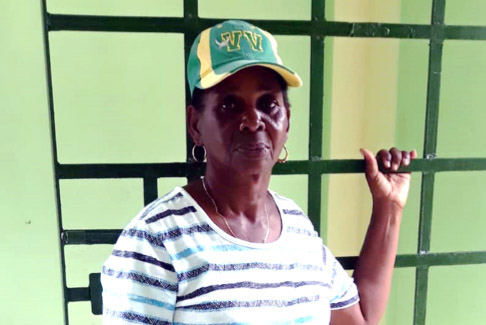 A native to Dominica, Georgiana is a single woman who is about 66 years old. Although she has one daughter, she is poor herself and unable to support her mother. Georgiana speaks and writes English.

Georgiana is in relatively fair health. She does have, however, high blood pressure, knee problems, and some difficulties with her vision.

In her younger days, Georgiana worked hard to support her family by working as a farmer. In September 2017, Hurricane Maria devastated her life by destroying her farm, home, and possessions. She has received no assistance from the government or NGOs to help her rebuild.

Georgiana is so grateful to be housed in a seniors’ shelter while she waits for more permanent housing to be built. She contributes actively to the running of the shelter and is particularly helpful in the garden, where she raises food for all of the residents to enjoy. When she has a few moments for leisure, she can be found socializing with the other seniors as they assemble jigsaw puzzles together.

Sponsorship for Georgiana will assist in the provision of regular food, medication, and many other items of basic need. Just as importantly, your assistance will let her know that someone cares. Thank you so much.