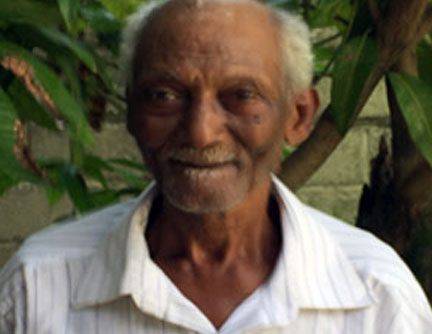 Exemma is a 79 year old married man. He and his wife have seven children, six daughters and one son! He speaks Creole and is illiterate. He is known to tell a good story though, even if he can’t write it! Described as a gentle man, he loves to amuse those around him with his clever jokes.

For many years Exemma supported his family by working as a farmer on an estate. Farming coconuts, he sustained a terrible fall from a tree that left him unable to work, though his frailty from age was already setting in. He has no pension, workmens compensation or government stipends at all. He is poor, hungry and unable to support himself, his wife, and his hungry grandkids. His children are unable to help as they are poverty stricken themselves.

Exemma suffers from arthritis from years of hard work and his injuries from his fall. He suffers from depression, which is related to his inability to care for his family. He doesn’t have to feel this way. He does his best every day to gather firewood to cook whatever meal they may have for his wife and his grandchildren, who are there with hungry tummies most days.

HelpAge Canada has collaborated with this partner caring organization for many years, helping extremely vulnerable elderly persons who might otherwise not survive. Your valuable sponsorship will assist in the provision of food, clothing, and many other basic necessities for Exemma. Just as importantly, he will know that someone cares about him.