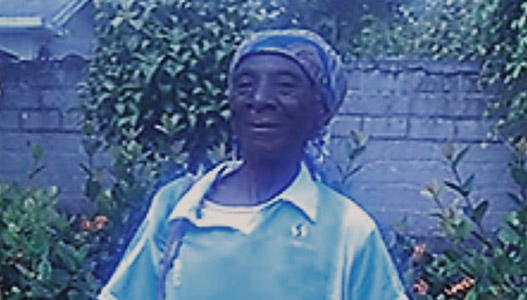 Although Celina does not know her date of birth, she believes that she is about 81 years old. Married at one time, with one daughter and one son, she has been separated for many years. She is Catholic, speaks Creole, and is illiterate.

Earlier in her life Celina was a devoted homemaker who enjoyed caring for her family. A hard worker, she also helped support them financially by farming. With increasing age and the onset of arthritis Celina became unable to work. Her children, who now live in Port-au-Prince, send her whatever they can. Unfortunately, because they are impoverished themselves, their contributions are meagre and infrequent.

Celina currently lives alone in an ajoupa (essentially a gazebo) and survives by begging. She is a determined, resourceful woman who, although she aches all over, gets out and scrounges for whatever food she can find. In addition to her aches and pains, she is also hard of hearing.

HelpAge Canada has collaborated with this partner caring organization for many years, helping extremely vulnerable elderly persons who might otherwise not survive. Your valuable sponsorship will assist in the provision of food, clothing, and many other basic necessities for Celina’s care. Just as importantly, she will know that someone cares.