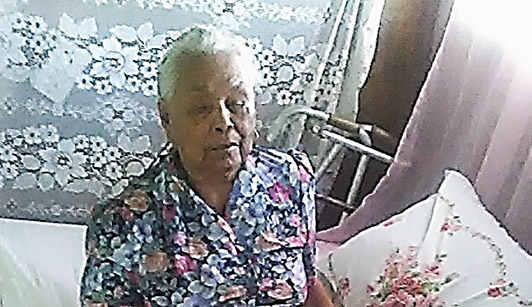 Grannie Alline is an 84 year old woman who has been through much in her life. Now a widow, she and her husband had twelve children, ten of whom are still living. Alline is Catholic, reads and writes English, and speaks English and Patois.

For many years Alline was a devoted homemaker who enjoyed caring for her family. She had a passion for cooking and loved tending her kitchen garden, where she raised much of the produce that graced her family’s table. Born and raised in Crayfish River, she also enjoyed fishing for crayfish, which remains one of her favourite foods to this day.

Although several of Alline’s children have moved away in the hopes of finding employment, she is fortunate that one of her daughters remained next door to her. In the fall of 2017 hurricane Maria ravaged Dominica and destroyed Alline’s humble home. Since then she has been welcomed into her daughter’s home, where the living conditions are quite poor and yet her family is so attentive to her needs. Alline’s name remains on the waiting list for a small government house, as yet to be built, but will not likely be a priority, since she is currently so well looked after.

Over the years Alline’s eye sight has failed, and she is now completely blind. A determined woman, she does everything that she can to remain as independent as possible, yet also graciously accepts the help offered by her family as well as staff and volunteers from St. Vincent de Paul. Described as friendly and sweet, Alline maintains an active interest in those around her and is a much-loved member of her community.

Your valued sponsorship for Alline will assist in the provision of food, medication, and many other items of basic need. Just as importantly, she will know that someone cares.