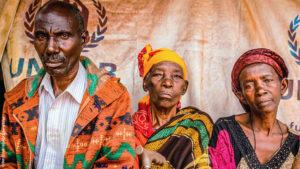 COVID-19 has amplified the violence, abuse, and neglect of older people around the world, which was already on the rise, says HelpAge International today on World Elder Abuse Awareness Day.

Before the COVID-19 pandemic, it was estimated that 1 in 6 older people, were subject to abuse. Emerging evidence is indicating that this has sharply increased in many countries as a direct result of the pandemic.

“COVID-19 has caused considerable stress for people of all ages, for example due to lost incomes and difficult conditions created by restrictions on movement, physical distancing and isolation measures. This has seriously affected older people living in low- and middle-income countries, especially women, who were already socially and economically disadvantaged before the pandemic,” says Georgina Veitch, Global Advisor on Violence and Gender Equality at HelpAge.

“Unfortunately, COVID-19 has highlighted and exacerbated the abuse and neglect that older people have always faced.”

The abuse endured by older people includes physical, financial, psychological, verbal and sexual abuse, as well as neglect. HelpAge has received reports of increasing numbers of incidents perpetrated against older people from across the globe since the COVID-19 pandemic began. Those at higher risk include older women, persons with disabilities, and those with support needs.

“Too often, elder abuse is hidden. Older people themselves do not report it, as they fear retribution or stigma, and sometimes do not recognise it as abuse. Governments need to acknowledge that elder abuse exists and ensure that laws are in place and used to prosecute perpetrators,” says Georgina Veitch.

Elder abuse is rising in some countries during COVID-19 crisis

In Nepal, the police department received 18 calls in relation to the abuse of older people between December 2019 and February 2020. This increased to 52 between March and May 2020.

In the Democratic Republic of Congo (DRC), HelpAge DRC has received 33 calls related to abuse of older people since the outbreak of COVID-19 (neglect 55%, physical 20% and financial 25%). This compares to 41 calls for the whole of 2019. Anatole Bandu, HelpAge DRC Country Representative expects this to increase to well over 100 cases by the end of the year.

Several violence helplines run by HelpAge staff or network members and partners reported an increase in the number of calls from older people, predominantly women.

In Jordan, in the first two months of lockdown, HelpAge network member Solidarity is Global Institute (SIGI) received 812 requests for urgent help (20% of which were for domestic violence). This is more than they usually get for a whole year (about 650). Several of these requests came from older people but Asma Khader, CEO of SIGI said:

“The reported numbers of older people affected by abuse during the COVID-19 pandemic do not reflect the reality as many don’t know how to report incidents or even if they do, they may not have a telephone and they are scared. Often abuse is perpetrated by family members that they are dependent on; they have no means to support themselves and they fear they would be threatened or worse if they asked for help.”

HelpAge Kyrgyzstan reported that nine crisis centres received 29 calls on domestic violence from older people (27 women and 2 men) in just over one month, between 25 March and 30 April this year. Many of those who phoned incomplained that their family members were taking their pensions, especially in those families where alcohol is consumed.

In January and February, they received approximately 14 calls each month.

The World Health Organisation states that only 4% of cases of elder abuse are reported, so the actual incidence of abuse of older people is likely to be to be much higher.

Anecdotal evidence suggests that economic stresses caused by the COVID-19 crisis are increasing the incidence of economic abuse of older people.

In Mauritius, for example, HelpAge network member Dis-Moi reported that two women aged 85 and 87 had been assaulted for their pensions. The 85-year-old was assaulted by three men and the 87-year-old by her own son.

In Kenya, Elias, an older man and landowner was kidnapped by a group of young men who demanded a ransom for his release.  When the kidnappers realised that their scam wouldn’t work, they beat him up and left him for dead. Elias was known in the area as being the point person for registering people made vulnerable by the COVID-19 crisis and it has been reported that that the men suspected he had benefited from the fund himself.

Mary, aged 65, from the Democratic Republic of Congo explained how living in lockdown increased tensions between her and her husband and led to abuse.

“I have been married to my husband George (70) for 45 years. He is a businessman with a shop in Kinshasa. He normally spends most of his time at work but for the last month and a half, we have spent a lot of time together in the home. And I have seen a completely different side to him.

He received a lot of calls at home, but with certain calls he would go outside or in the toilet. I began to be suspicious and then found out that he was having affairs with other women and we started to quarrel. And things got very heated.

On 28 May 2020 he accused me of trying to poison him. He told the neighbours that I had killed a woman who died two weeks ago and that I was a witch doctor. The neighbours then started to throw stones at me.”

Across the globe there have been reports of countries denying medical treatment to older people, choosing to prioritise younger patients ‘who have more chance of surviving’ or refusing to treat older people with COVID-like symptoms for fear of contracting the virus.

In Cox’s Bazaar refugee camp, Bangladesh, for example, health workers were too afraid to treat older people with seasonal flu as they thought they had COVID-19.

In DRC, HelpAge DRC learned that at least one older person had died after being taken off a ventilator to make way for another patient.

On 10 May, Souzi[1] took her 68-year-old grandfather to the hospital after he displayed COVID-19 symptoms.  When they arrived, he was put onto a ventilator to try and stabilise his breathing. Souzi went home to get him some food and returned shortly afterwards. “About 30 minutes later, a hospital staff member took him off the ventilator as they said they needed it for someone else. There were only three ventilators in the hospital and they were in great demand. Five minutes later, my grandfather died. I reported this to the staff and one of them told me that they had to give the ventilator to a younger man who had been admitted as it is their policy to prioritise younger patients,” Souzi explained.

Souzi reported this instance to Anatole Bandu, the HelpAge DRC Country Representative who said: “Unfortunately, this is not the first instance of older people dying, as a result of ventilators being given to younger people. Sadly, older people are seen as dispensable in DRC.”

In Cameroon, Paa Mathieu, an older disabled man from Koa village in the Centre Region of Cameroon, who was suffering from pneumonia, started to cough and feel very tired. His sister took him to hospital. When they got there, Paa Mathieu recounted: “They did not take care of me, saying there is no bed for people like me.”

What is HelpAge doing to support older survivors and older people at risk of abuse?

HelpAge is working with communities to support them to recognise and prevent elder abuse and help them to support older people affected by it to access safety and response services. This includes access to counselling and legal advice for older survivors. We are also providing older people with the information they need to seek support if they are experiencing abuse.

HelpAge is advocating for prevention and response services, that are inclusive of older people, to be categorised as lifesaving and essential in the context of the COVID-19 pandemic. HelpAge is also continuing to advocate for laws and policies to protect older people from violence, abuse, and neglect.

World Elder Abuse Awareness Day (WEAAD) was launched on June 15, 2006 by the International Network for the Prevention of Elder Abuse and the World Health Organization at the United Nations (UN).

HelpAge network members and partners as well as campaigners will be taking action around the world to support people to recognise elder abuse and help and encourage older people affected by it to access safety and support services to coincide with World Elder Abuse Awareness Day.  This will be done through the use of flyers, radio programmes and media coverage which will be raising awareness of elder abuse and ageism, and also providing local, practical details of how people affected can seek help.

[1] Name has been changed to protect identity